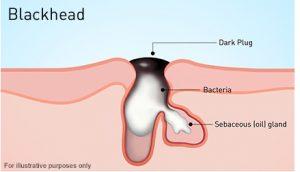 
What exactly are blackheads? Why have they been ruining our lives since the dawn of our horrendous teenage years?

Blackheads, or in the proper terms, Condones, are essentially clogged pores. Blackheads don't always necessarily mean the pores are clogged with dirt. The same way acne isn't a sign of lesser hygiene. Over manipulation and over-exfoliation of the skin can also lead to inflammation that causes acne.

So, if blackheads aren't dirt clogged in our pores what is clogged in their? The answer? Oil, from the sebaceous gland. The name blackhead stems from the color of the bump on skin, which lead to the myth about dirt. The black color is simply oil that has been exposed to oxygen through the skin and has turned black from oxidation.

Now, most people think the pores on their noses are these huge blackheads and you need to rush out and buy those painful strips and expensive products. FALSE. While you can of course get whiteheads on your nose most of the time those dark pores you see are just your hair follicles.

Those dark pores on your nose that most worry about (for no reason) are called Sebaceous Filaments. Sebaceous filaments are collections of dead skin cells and oil that build up around your tiny hair follicles. These tend to be way more noticeable because the pores around your nose are bigger. These are also some of the glands on certain areas of your face that overtime secrete more sebum. The biggest difference between filaments and blackheads is that the cone filaments will continue coming back.

Unlike, blackheads filaments are not clogged pores. They are the natural production of sebum. They will continue to come back because these filaments help your glands to secret sebum much more freely.

Sometimes the mixture of Sebum (natural skin oil), dead skin cells, and bacteria can mix together and form a thick plug in your pores, instead of secreting naturally. Look at the chart below for a comparison: 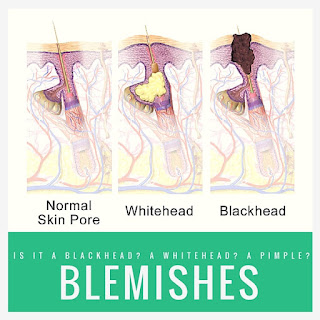 Now, as always life happens and it mostly happens to your skin. If your face is kept clean then those sebaceous filaments are nothing to worry about, but if you aren't cleansing your face the correct way those filaments can turn into acne because they never stop secreting sebum, that is their function.

I know most of our first impulses are to squeeze these blackheads or sebaceous filaments. That can cause scarring (story of my life, thanks teenage Adrienne), inflammation. Worst case scenario, it can cause more infections. So, just let your skin rest! When in doubt don't touch your face and wash your face at least twice a day, and you should be just fine! At least now you know, what's normal and what's not. Education is the first step to clear, beautiful, radiant skin.

Popular posts from this blog

September 16, 2018
What is the Xtava Black Orchid? A diffuser that is bigger than the normal ones on the market. Has tiny holes in the prongs to help distribute air quickly and efficiently through the hair to help dry quicker. The large bowl allows for quicker drying time for even the thickest of manes. This diffuser gives maximum definition to every texture from waves to coils. Since the diffuser is much larger in regards to width than normal ones on the market, (Xtava black orchid width: 1.8inch diameter) finding dryers to fit the diffuser without having to take out the little ring inside the diffuser is tricky. Xtava Black Orchid Nozzle Measure = 6 inch circumference Please note that the Xtava Black Orchid Diffuser is not a universal diffuser. A quick trick to help adjust the diffuser a bit more to your current dryer is taking the internal ring out of the diffuser, allowing it to open up more and accomodate a larger variety of dryers. Here is a list of dryers I have compiled that fit the X
Post a Comment
Read more

April 04, 2018
Everything You Need to Know About Olaplex # 3 What is Olaplex #3? Olaplex #3 is called the "hair perfector." It is neither a protein treatment, moisture treatment or deep conditioner.  It is a bond builder. Olaplex #3's main function is to relink the broken disulfide bonds in every single hair type. It provides real structural repair that works from within. Broken bonds often result in split ends and breakage. Similar to a protein treatment, Olaplex #3 provides structure to repair those bonds and prevent split ends and breakage. It penetrates the disulfide in the cortex of the hair that gets damaged from chemical treatments or the overuse of direct hot tools such as hair straighteners. The cortex (center) is responsible for the hair's color, texture, and strength. Once those bonds are damaged or dry that is when split ends and breakage occur. How Do I use Olaplex #3? Here's a few tips to help answer the FAQ about the olaplex steps: Olaplex is meant to
1 comment
Read more

What's the Difference Between "Clarifying" and "Cleansing"

June 16, 2018
What's the difference between shampoos? Don't they all do the same thing? Nope , companies knew the secret every woman needs to have a happy life. Variety. We need different products for different occasions, better safe than sorry, right? Let's discuss some of the differences between clarifying and gentle cleansing shampoos. Clarifying shampoo : Meant to deep clean , to help remove build up from products. Often product labels will use one of these three words to describe the product: "Clarifying" "Purifying" "Detox" Clarifying shampoos are all about detoxing your hair and scalp from the products, sweat, and other stubborn buildup. The purpose is to essentially "wipe the slate clean." This means everything that is in your hair (oils including scalp's natural oils,  products, sweat, hard water deposits) is completely washed away. Clarifying Shampoos contain a much higher level of surfactants providing a deep clean
4 comments
Read more